The Water is Heating Up...

Having spent the last year and a half exploring the relationship between library education programs and the library field, it has become quite evident that libraries sit on the precipice of transformation or, more ominously, extinction. This does not mean that libraries must recreate their infastructure or transform their collections. The changes that must occur start at the intellectual discussion of what it is that libraries ultimately do.

Certainly, it is a widespread perception that libraries are "valuable". Yet, this value is frequently the product of granular calculations like the number of materials circulated or the number of people who attend programs. When discussions around value are observed to be based on things ike the Friends of Canadian Libraries value calculator, discussion around the meaning and relevance of libraries shifts from an examination of their sociological and cultural impact to a reductionist analysis of transactions. While some library folk may loudly protest that libraries are strong and are doing a fine job of staying relevant, it is useful to examine present conditions and trends to determine if this is, indeed, the case. Like the frog that enjoys his aquatic environment and is unaware of the looming threat that his water is slowly being brought to a boil, libraries may find it difficult to see how certain decisions may result in unintended and unwanted consequences.

A recent Vanity Fair article, “Firestorm on Fifth Avenue”* examines the festering battle over the fate of the famous Fifth Avenue location of the New York Public Library. Essentially, the board hopes to relocate much of its collection to an off-site environmentally controlled space and renovate the iconic building, recreating the interior space to accommodate a circulating library that embodies 21st century sensibilities. Many argue that moving the historical collection and radically changing the interior space of the library threaten the very essence of the library as a place of research and creative inspiration. 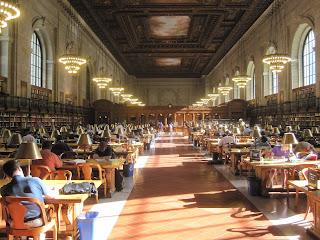 At face value, the debate over renovating a notable civic building appears quite pedestrian and expected. Indeed, it can be portrayed as a fight between “progress” and “tradition”. While there are always people who want to preserve the past, there is constant pressure to change and improve. However, decisions to restructure the New York Public Library may stem from a need to liquidate two nearby properties that support the Fifth Avenue location and would bring important funds into city coffers.

It is debatable whether the proposed changes to this library are truly progressive. Indeed, it is difficult to ignore the growing tendency for governments to become so focused on accountability and efficiency that the greater intellectual conversations about the purpose and scope of public service are single-handedly dismissed. Those who attempt to engage in public discourse about the cultural, sociological, historical and philosophical merits of spending money to better the human condition are easily dismissed as being “unrealistic”, embedded in some idealist sensibility that merely impedes progress. It is becoming increasingly difficult to have conversations about what is “valuable” because value is being redefined to suit a very granular and scientific world view.

There is a growing disconnect between creating rationalized systems of operation and the need to serve the cultural, social and philosophical needs of communities. By trying to create justified and 'accountable' systems of management, there is a great opportunity to lose touch with our raison d'etre. As sociologist and philosopher Max Weber asserted, we undermine our ability to fulfill our obligation to support the education of our fellow citizens by becoming slaves to bureaucracy and managerialism.

"Man has a way of becoming enslaved to his own instruments, and of getting so occupied with the means of life that he forgets the end.", A.D. Lindsay** .

The crushing pressure to fund public services conflicts with the ever-increasing need to rationalize the existence of such services. In the end, providing mechanisms for sustaining a democracy are not only expensive, they do not pay a clear dividend at the end of each year. Success must be measured differently. However, this is profoundly difficult to do when politicians are increasingly dependent on making decisions based on quantified data collected by technically trained experts who have become quite removed from intellectual discourse themselves. The tensions between managerial control and professional autonomy begin to surface: librarians lament at the de-professionalization of their workforce at the expense of operational efficiencies and bureaucrats struggle to create balanced budgets.

It is within this context that that the water begins to heat up… library administration becomes vulnerable to subscribing to systems of management that can undermine the very values that shape libraries. While there remain many who support their community libraries, this support exists within an increasingly tenuous environment where challenges to free and open public services are regularly made. The growing number of public-private partnerships and user-pay systems are telling examples of diminishing commitment to funding services for the public “good” without some level of private sector involvement. This involvement comes with significant costs of its own, including trade-offs in services, values and influence.

Without participating in candid discussions about the fate of the public sector, library staff are at risk of subscribing to a world view that eats away at the very foundation of their profession. Libraries are not about providing story-times, recreational reading opportunities, access to Ebook collections or, even, meeting space. Public libraries are about providing access to information and services for the purpose of supporting a democracy, for it is only an informed citizenry that can truly participate in its own governance.

While it is only logical that libraries aspire to provide the best level of service in the most cost-effective manner possible, it cannot occur at the expense of the public they are charged to serve. For this reason, it is critical that members of the library community participate in open and a reflective discussion about what it is that must, at all costs, be protected for the benefit of society. These discussions must occur among practicing library workers, students of the field and members of the community. The construction of "circulating" libraries and bookstore-like branches serve an important role in the community but they must be balanced with endeavors that centre on the protection of information rights. Library workers need to to engage in deeper intellectual discussions about the influence of marketization on their services and, ultimately their value systems. If a transparent discussion on the role and values of public sector services is encouraged and sustained, it will enable communities to ensure that their core values are less vulnerable to erosion. Rapid changes, often spawned by technology, have put many library systems in defensive positions, reacting to change without a firm and well articulated intellectual framework to draw from.

It is, quite simply, not enough to say that "literacy" is important. We must be prepared and able to explain why.

Christina, have you read Ritzer on the McDonaldization of bureaucracies? Which I read about recently in this thoughtful and somewhat related post on the dangers of taking a systems approach to much needed reform of the court system
http://www.slaw.ca/2013/01/17/mcjustice-whos-lovin-it/

I don't think public libraries should rely on their perceived role of supporting democracy. If you'll excuse my cynicism, I don't think library funders are interested in spending money to support democracy, but I think they would like to demonstrate that they contribute to people's ability to support themselves: literacy, access to technology, developing skills to find 21st century jobs... I don't know what we should do about the fact that some of the most vocal defenders of libraries strongly value book warehousing, because that's not going to help libraries survive.

I agree with your inner cynic, Mandy. I just think it is part of our professional obligation to remain intellectually connected with our broader values. Preaching democracy to our administrators does nothing to ensure our immediate needs are met. We also need to state our case in terms that can be understood by politicians and, sadly, intellectually removed bureaucrats. However, the only way to begin refocusing priorities and moving away from this systematic treatment of resources and public sector needs is to change the conversations. We, as library folk, need to engage in discussions with our communities and our olleagues and resist subversive efforts to undermine our values and focus.

I just heard about the Vancouver parks board deploying 'staff' to take money generated by community centres in a move to fairly redistribute the 'wealth' among other centres. It was pointed out in a CBC interview that this is a prime example of people doing what they are told with no understaning of the political and cultural contexts in which these community centres exist. The cry of protest gives us hope that our communities do not wish to be rationalized, that there is something intrinsically valuable about local control.

The difficulty with such a deep, disruptive problem such as we face is that there are so many aspects that need our attention:
underpinning democracy (as you point out) is one; re-connecting with lifelong learners is another; showing our users that "access to information" is analogous to "access to digital culture, is yet another. Either we split up our "activist" resources (some folks tackling one problem, others tackling another, and so on) or we take another step back.

Ultimately, I think it comes down to reflecting our community, whatever they wish to be and whatever they wish us to be. The really scary, disruptive, possibility is that they don't wish us to be anything that we, ourselves, want to be. We talk about core values but sometimes I think we're inadvertently talking about our core values and we don't realize when those values are no longer our community's values until it's too late to go back and realign ourselves with our community. All the while we think we're doing the right thing because the subset of our community who still use the library are in our faces, fully occupying our time and energy, so that we don't notice that the rest of the community has carried on without us. That's what keeps me awake at night.

Fair points Phil! I suppose my belief is that, as a member of the 'community' I have a right and an obligation to weigh in on these issues. In my role as an educator, it is my duty to probe and hope that others take on the discussions. Hopefully, those entering the workforce will reflect on these complexities and be, even a little, less inclined to accept things at face value. My hunch is that our communities are often as distracted as we are and do not have opportunity to assess the long term ramifications of more recent approaches to managing public services. We need to check in with ourselves from time to time and question our own decisions.