While there are many who share their conference-going experiences, I feel compelled to share my impressions of the latest national conference. 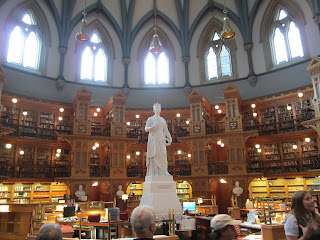 Situated a short walk from Library and Archives Canada, a national icon for Canadian heritage that is presently under seige, the conference was held in a vacuous space at the Ottawa Convention Centre. While an estimated 800 delegates attended the conference, the venue felt much smaller. Aside from a small Internet Cafe on the trade show floor, conference delegates could enjoy wifi access for a whopping 28 dollars a day. Not surprisingly, this greatly impeded the "tweet scene" that is a popular way to to share impressions at conferences. Presenters were subject to the same steep fees if they wished to access the Web for their sessions. While outwardly a small thing, this kind of compromise in service does little to encourage future delegates to attend conferences that are, already, expensive endeavors.

This was the backdrop to an already tense scene as librarians and archivists from across Canada process the news that the 2012 federal budget will gut the LAC, evaporate the National Archival Development Program for archivists and eliminate the Community Access Program (CAP). While no one would likely dispute that times are-a-changing, those in the information field know that these are not carefully measured and researched decisions. Yet, the Canadian public is assured that digitization and the Internet are all that is needed in this brave new world. Suuuuure.

It was with immense curiosity that I attended the opening keynote address by Daniel Caron, Deputy Head and Librarian and Archivist of Canada. As the figurehead of all that is currently wrong with the LAC, I could not help but wonder what the audience would do. With perhaps 150-200 people in the room, he received a muted but polite hearing. Unfortunately for Caron, suggesting that the LAC would advance Canada's national information interests through the adoption of social media rang hollow in a room of professionals who recognize that this is neither innovative nor a substitute for good information management practices. His presentation affirmed that he is a public administrator and an academic who serves the people above him rather than the people below him. This lack of authentic leadership merely impedes real innovation and creative problem solving which is essential to helping Canadians understand and adapt to change.

During the conference there was much discussion through social media about the role of CLA and its lack of interest in actively supporting the archivists and librarians who were to suffer at the hands of cutbacks. Yet, at the conference, people migrated politely from one session to another. Other delegates participated in an amazing advocacy event called CLA on the Hill where they had an opportunity to discuss relevant issues with over 63 Members of Parliament. In the thick of this, however, there was an effort to rally support for the Canadian Association of University Teacher's (CAUT) Day of Action by a handful of folks who handed out black ribbons. Since emotions were running high, this situation erupted when non-delegates were asked to leave the conference area. Interpreting this as an act to suppress expression over the LAC cuts, APUO Librarians cried out in their blog post titled:Librarians silenced at CLA conference. The post made its way through the social media circuit generating much concern and confusion. Had there been wifi access at the conference, the online debate may have gone much further. Regardless, it was interesting to note that this concern over CLA's position on library worker conditions did not open up more discussion in the halls of the actual conference. 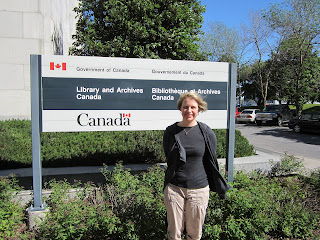 The CLA executive did host a scheduled session that focused on gathering feedback to further "tweak" CLA's revised mission statement by asking "how best can CLA put the role of “national public voice” into action?". Ironically, more people seemed interested in participating in the humourous improv session called Battledecks next door. Despite criticisms of CLA's mission, there were only about 20 attendees providing feedback on the revised mission statement. Yet, even among those few that chose to make the mission statement a focus for discussion, there was some important and useful feedback.

CLA is the national public voice for Canada’s library communities.

We champion library values and the value of libraries.
We influence public policy impacting libraries.
We inspire and support learning.
We collaborate to strengthen the library community.


It was suggested that the mission should be presented as:

CLA is a national voice for Canada’s library communities.As members we:


In October an LTAN recommendation will be put forward that CLA support an initiative to create accreditation for LIT programs. It will be interesting to see if the the CLA goal to "inspire and support learning" applies to members and potential members of their own organization.

It was quite clear that the CLA executive, did not see the role of CLA as a labour organization. Rather, the mission and the mindset of the organization is to influence policy through diplomatic means and represent the notion of a "library" than the workers, specifically. This brought out some debate as to where issues relating to labour can be channeled. There is no doubt that this was fueled by the recent federal cutbacks and there is no shortage of opinions about CLA's decision.

One of the more interesting aspects of this conference was the introduction of a "Living Library". A host of volunteers, many of whom were presenters at the conference, were scheduled to be "checked out" by guests for 30 minutes of conversation. It was a terrific idea. As one of these books, I enjoyed provocative and thoughtful conversations with library school students and colleagues. It provided attendees with an opportunity to have candid and intimate discussions about the issues that matter to them most.

There has been a lot of criticism about our associations in recent years and much of this is born from the same challenges that drive change in our libraries including the shifting face of communication, economic pressures, globalization, the Internet and so much more. The problem is, we try to solve our problems using old solutions. Conferences, for example, should be about conversations not sessions. They should be about problem solving not "what we did good in our library". As part of problem solving, however, they should also be stimulating and profoundly inspiring. It is that inspiration that fuels delegates throughout the year as they resume the challenges that lie ahead. Perhaps a little "play" is in order, with more Q&A and debate experiences. Perhaps it is in the hallways that we can check out our living books and examine posters, library "art", provocateurs, and playspaces.

Again, this can only happen if we become personally accountable for the state of our associations and act to shape them into what we need them to be. This means we cannot cry out from the sidelines. This means we act. If you need a push in the right direction, start voicing your ideas in any one of the CLA networks.

Posted by Christina Neigel at 3:57 PM

Great post, Christina! You identify what I think is the central problem, which is the need for conferences to be opportunities for conversation, for dialogue. I certainly thought I saw you trying to "shape" your BCLA Shape Shifting session that way. You are right though; we certainly need to talk more about the political issues that concern us.

Now more than ever, with this ideologically driven federal government, library folks from various perspectives need to unite, to coalesce around the need to stand up for libraries and library services.

Bravo Christina Well stated. Thanks for contributing this.