An ALA Experience - Washington D.C. 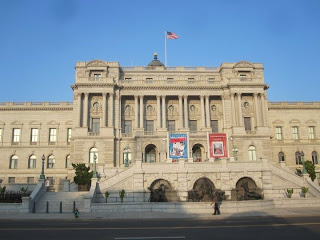 There is nothing quite like attending a conference where thousands of library folk converge against the backdrop of a beautiful city. As I made my way between sessions and museums, I would play a little game of "guess who is a librarian?". The odds are very good when there are over 20, 000 registered attendees swarming the city.

This conference confirms my belief that only a small portion of any conference is about the sessions. There is, truly, only so much one can learn in a two hour session. On the other hand, there is a lot to be learned by chatting with other attendees, exhibitors, vendors and organizers. The most enlightening experiences seem to manifest from casual conversations where like-minded souls seek an opportunity to discuss their passions and interests. This is how I discovered that many of the feelings and disjointed ideas that circle within the confines of my own mind are actually shared by a variety of others. 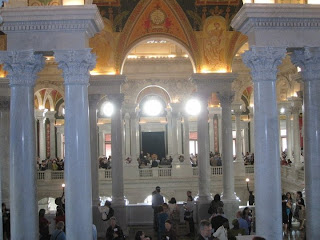 This kind of experience inspires and rejuvenates in a way that cannot be easily duplicated through other forms of professional development. It is not so much about learning new content or theories as it is about learning to measure your own, personal experiences against the experience of complete strangers. Through this process it becomes quickly evident that the world is much like a house of mirrors, reflecting things in a variety of perspectives that will simultaneously amuse, disturb and surprise.

It was a delight to atttend a conference that is all about how to support the public's need for self-actualization in a city that symbolizes liberty and self-determination. All cynicism aside, it was amazing to attend sessions that explore concepts of intellectual freedom, literacy, and technology and then venture out into the oppressive heat to see the Library of Congress in all of its glory and explore the many Smithsonian museums, free of charge. As a humble Canadian, I could not help but feel envious of American patriotism. They celebrate their accomplishments with such pride and passion that, despite our own somewhat jaded views, is remarkable. Make no mistake, I noted many "interesting" interpretations of world history when it did not directly relate to American history. For example, an eager docent at one of the Smithsonian museums eagerly explained to his audience how "Canadians" burned down the White House and the Capitol buildings in 1812. It did not seem that important to mention that the British had a rather large role to play in that particular event...
Nevertheless, there is an enormous amount of history in D.C. that makes it a completely worthwhile place to visit. For library folk, it is a city that not only represents the aspiration of creating an informed citizenry but it also pays homage to early American visionaries and leaders who sought out ways to make this vision feasible. It is a place where you can examine early American documents and artifacts while weighing them against a modern picture of America. Above all, it is a city that has inspired this librarian to carefully reflect on the future role libraries.
While trying to squeeze in visits to every museum and monument along the National Mall, I struggled to balance my time at the ALA conference. I had plenty of opportunities to select my sessions in advance of the conference but I had no idea there was so much to do at the conference. The magnitude of the event was hard to envision beforehand, having been a regular at many smaller conferences. Yet, many of the session topics were not dissimilar to those seen at other venues. There were just more of them. For example, the general feeling was that we, as library workers, continue to devise new ways to make our institutions relevant. We struggle to integrate technological change in meaningful ways that are genuinely helpful to those we serve. It would be refreshing to have some open and controversial sessions on what we need to do better. Many of my colleagues have snidely remarked that library conferences tend to be about "what we did good in our library".
There is a notable absence of discussion on what we do not do well. Through my discussions with various librarians, it is clear that there are a great number of us who continue to be concerned about the division of labour in our workplaces and a lack of authentic leadership. For instance, it is unsettling to think that those revising our cataloguing standards do not seem to feel the need to consult with those who actually catalogue (national libraries aside). It may be that we are being "led" to a trough of new standards which few practitioners fully understand. Our field lacks a collective voice that has notable influence with our various governments. We rely heavily on our library members to defend our relevancy. Although this is critically important to the continuation of libraries, I wonder where our existing and upcoming library leaders are.
As intellectual property continues to gain importance as a commodity in the global marketplace, our position as knowledge builders must be clearly understood by policy makers. Historically, this work has been done by local and national library organizations. Those organizations are grappling with decreasing memberships. Who, then, will challenge the corporate machine? Who will ask the difficult questions? Who will defend our budgetary needs? For this reason, we need conferences to expand their offerings to examine these very large issues. Without such discourse, we remain ignorant and rudderless when we attempt to navigate our future. 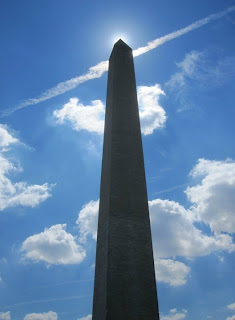 The 2010 ALA Conference was a fantastic opportunity to intersect with a variety of very interesting people. It solidified several of my own perceptions about the field of practice, confirmed many suspicions, stimulated some some new ideas, taught me a thing or two about library processes and provided me with a unique opportunity to see a lovely city. The bizarre and, strangely, intriguing Drill Cart Competition will be forever burned into my mind. And, finally, there is nothing more fun than attending the Caldecott and Newberry Award banquet when you are a children`s librarian at heart.
Petty and trite as it seems, it is now fun to re-read Dan Brown's The Lost Symbol and think, "I saw that in person and there is just no way..."
Posted by Christina Neigel at 12:46 AM

I grew up in the Washington, DC area so I can appreciate your trying to take in the many sites. I am sure growing up in DC area contributed to my lifelong commitment and hunger for learning